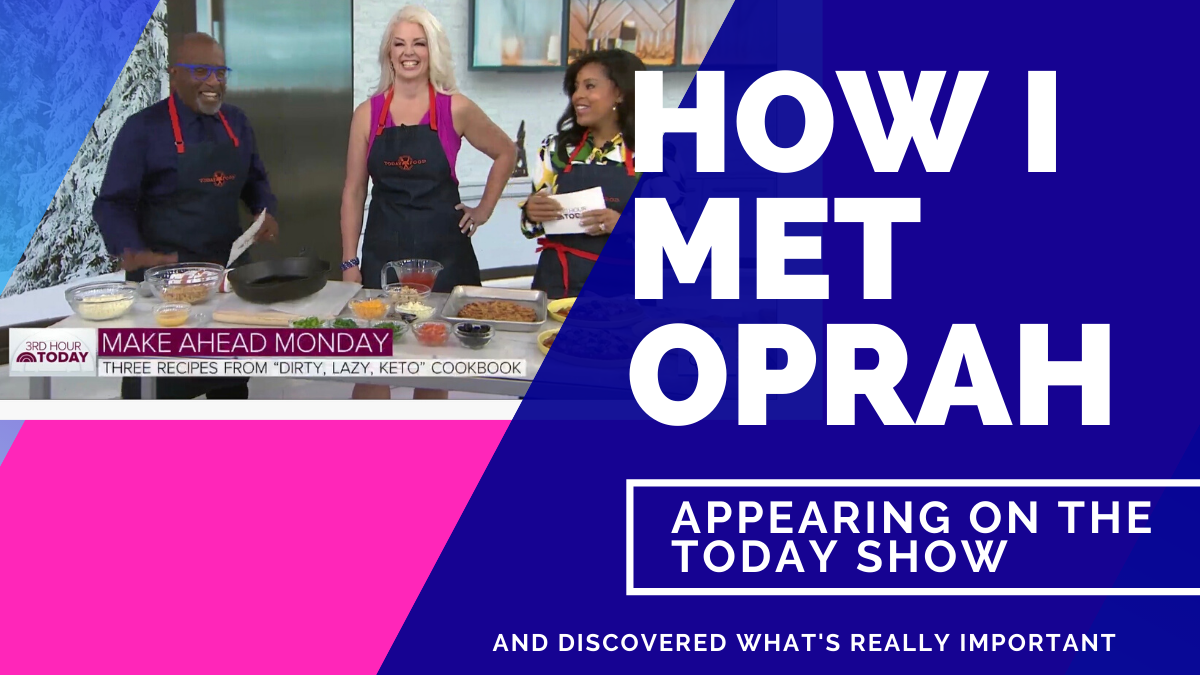 You may have heard I was recently a guest on NBC’s TODAY Show. DIRTY, LAZY, KETO© has come out of the closet! We have apparently gone mainstream thanks to my keto-buddy, Al Roker. In case you’re curious about what goes on behind-the-scenes when appearing on a national television program, I’m going to give you the skinny.

While getting ready to board my plane to NYC, I had an impulse to check NBC.com to investigate who else might be appearing on the show. My stomach dropped to the floor and I almost fainted when I saw two of my two favorite stars on the planet listed next to my name on the roster: Tom Hanks and Oprah. Yes, I said OPRAH! I showed the lineup to my son with excitement. He seemed more interested to see that “Woody” from Toy Story would be on the show, alongside Carson Daly, Josh Dallas (Thor) and Melissa Roxburgh (Diary of a Wimpy Kid).

If I wasn’t nervous enough before, I now felt downright sick. I was sweating profusely and felt dizzy. I considered running back to my car and driving home. My self-doubt went into over-drive and I began to panic. I CAN’T DO THIS went through my mind about a thousand times as my family dragged me down the gangway onto the plane and strapped me down into my seat. We were going to New York!

The next morning, we met the producers at the TODAY Show for a practice run-through. Apparently, since I’d be cooking three meals from The DIRTY, LAZY, KETO Cookbook on live TV for the “Make-Ahead Monday” segment, the crew felt it best that I come in early to practice (THEY WERE CORRECT!). Because it was a Sunday, the TODAY Show was not filming. The set was quiet with only a skeleton crew present. Three long tables were set up with (what seemed like) hundreds of empty glass bowls, skillets, and sticky notes. Time to pretend-cook practice!

Twenty minutes later, we were on our way. I left with more confidence knowing where I’d be standing, how the food would be set up, and the timeline for the next morning. There was just one thing I couldn’t figure out… What would I say to Oprah?

I spent the afternoon walking from Rockefeller Center through Central Park to the Guggenheim Museum. Since we pulled our kids out of school for the trip, I felt the need to do something that was somewhat “edubacational.” I paced a few steps behind my kids while they looked at the art, repeating tomorrow’s recipe steps over and over again inside my head. I tried to imagine what else I would say. I felt an enormous responsibility to defend DIRTY, LAZY, KETO from the critics. We don’t eat keto junk food all day!

I could barely sleep that night. When the hair and make-up team arrived at my hotel room at 4:50 am, I could barely see straight! Does it really take that long to get camera-ready? (Or maybe I just needed a lot of help!) Before long, it was time to leave. At 7:50 am the “DLK Entourage” left Times Square heading toward NBC Studios.

The car pulled up to a “sneaky entrance” around the back of Rockefeller Center. The side entrance was blocked off to the public and heavily lined with security. In the distance, I could see a large crowd of TODAY Show fans holding silly signs outside the studio. Before being whisked inside, I stopped to take a selfie.

The next hour went by lightening fast. We were constantly in motion. I went from security to the first green room where I waited my turn to go through hair and make-up (again!). Unbeknownst to me, I was sitting in a room full of celebrities. I was so busy trying NOT to pass out that I didn’t take any pictures! Because I was so nervous, I asked the nice producer to take me to the ladies’ room. She escorted me down a long corridor when her walkie-talkie buzzed, calling her back to the control room.

“Just wait here,” she insisted before running away.

I was standing there all alone when I heard it… the voice.

Clear as day, her voice coming from just around the corner – Oprah.

Decades of after-school episodes flashed through my brain. Hundreds of life-lessons, inspirational episodes, moments where I laughed (or cried) with Oprah all washed over me at once. Oprah taught me to trust my instincts and always believe in myself. At home, above my computer, hangs a sticky note where I scrawled my favorite quote from Oprah, “What would I do if I weren’t afraid of making a mistake, feeling rejected, looking foolish, or being alone” (What I Know for Sure by Oprah Winfrey, Flatiron Books, 2014).

Then the weirdest thing happened. All of a sudden, I felt calm. Surprisingly, I didn’t need to say anything to Oprah after all.

I knew exactly why I was on the TODAY Show. I knew what I needed to do.

I would tell the awful truth. No matter what.

I realized the reason DIRTY, LAZY, KETO connects with people is because it’s honest. It doesn’t require fancy ingredients and it doesn’t judge people for the foods they choose to eat. Canned chicken can become pizza crust, for cryin’ out loud — you can have your sugar-free cake and eat it too! I would march back to that green room with confidence. Oprah had spoken to me (well, from around the corner) and I had listened.

It was time to step into my authentic self. It was time to tell my story. You don’t have to be perfect to be successful. DIRTY, LAZY, KETO works.

So that’s my Oprah moment, folks. I didn’t need to travel to NYC to meet Oprah (in fact, I think her interview was pre-recorded anyway!). I discovered Oprah was inside of me all the while.

The DIRTY, LAZY, KETO Cookbook: Bend the Rules to Lose the Weight! by Stephanie Laska and William Laska is available at stores everywhere and online wherever you like to shop for books.

DIRTY, LAZY, KETO Get Started Losing Weight While Breaking the Rules by Stephanie Laska (St. Martin’s Essentials) explains the whole lifestyle and supports you to reach your goal!

DIRTY, LAZY, KETO Fast Food Guide: 10 Carbs or Less by William and Stephanie Laska is available only on Amazon.

To help you on your weight loss journey, Stephanie Laska offers a ton of helpful resources! Listen to the helpful free audio recording – a quick orientation to the DIRTY, LAZY, KETO lifestyle.